CVC Communications Agency, a proud sponsor of Doug Lawrence, was thrilled at his impressive run at the legendary Springfield Mile AMA Grand National Championship race at the Springfield Fairgrounds in Illinois back on Aug 31 and Sept 1.
Competing aboard his Harley-Davidson XR750 in the GNC Twins Division, Doug qualified a modest 16th out of 49 riders before fighting his way to 4th in his heat race and automatic trip to the finals.  There he managed to run quick, finishing near the front of the second pack in eight position, just over five seconds behind the winner Brandon Robinson.


As of press time, Doug Lawrence was sitting 13th in Expert Twins points with 2 races to go on the AMA schedule…..we’ll keep you posted!! 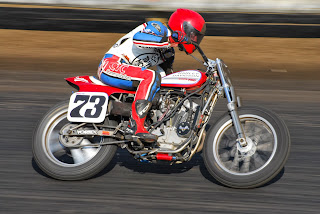 Posted by CVC Communications Agency at 06:25